Do you folks like coffee? Real coffee from the hills of Colombia¹? 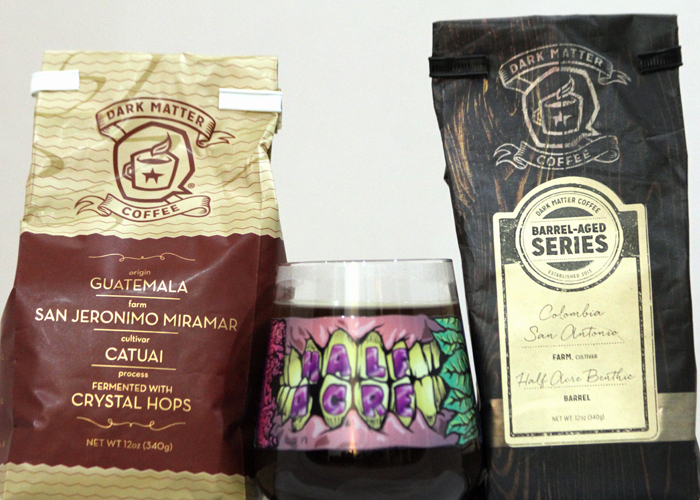 Cocoa-red—or even a see-through brown, kinda like that second cup obtained when you pour another 225 ml hot water over your used grounds in the French press to cheat the added labor and cost of grinding more beans—plus chocolate, darker crystal/black patent malt, and roasted pecan aromas, Shrub Tundra will wake you from a thousand deaths when the above semi-nonsense descriptors, plus a touch of Steen’s cane syrup, hit your belly. Yet the most appealing thing outside the very metal, very brutal can art is the lingering herbal, bright bitterness, as though hops and coffee beans sought each other out in some kinda unholy alliance—an elevation collaboration, say—of two seemingly disparate things now together at last.

Wowwee! you say, getting sidetracked. Could this devilish union be exploited even further to integrate the distinct acidic, spicy, and herbal characteristics of Humulus lupulus and Coffea arabica? Luckily for you, those Dark Matter geniuses have been experimenting with co-dry-fermenting² coffee beans and hops to achieve permutation elucidation for around four years. The Guatemalan San Geronimo Miramar farm beans, allowed to ferment co-mingled with crystal hops, produce a stunning cup of coffee exploding with citrusy brightness and fresh herbal, minty/tarragon aromas that taste nothing like the concept of “coffee plus hops³.”

WowWEE! you say. But why stop at flocculation manipulation? Why not add wood saturation implementation to make bean sequestration transfiguration incorporate beer maceration complementation? Well, barrel aging coffee beans—minus the ostentation reduplication—is something Dark Matter’s been experimenting with as well. The San Antonio batch aged in barrels that previously held Half Acre’s Benthic, their bourbon barrel-aged imperial stout that (coincidentally?) also contains Dark Matter coffee and toasted coconut, made a cup of coffee that might have been a bit too much like drinking your way out of a freshly-emptied bourbon barrel filled with coffee. Wood rumination obliteration.

Obfuscation extermination! you say. Beer obligation reevaluation! Fair enough, although Shrub Tundra is as much coffee generation unification as beer ideation fertilization. On a gorgeous once-an-autumn American football Sunday where the home team lost to the eventual Super Bowl LIII winners, a 592 ml mug of Shrub Tundra at the Balmoral Half Acre went down a little too easily, with the last bits shifting towards a more hoppy-sweet stout profile and away from the coffee-nutty aspects. Shrub Tundra gets it all right—integration, equalization, salivation, gratification…

…and, unfortunately, dispensation brutalization. It’s seasonal. You just might have to scream for your cream, and Shrub Tundra, during the spring and summer at one of Chicago’s—and the country’s—best breweries. You’re dying for a cup, indeed.  —B.S.

2Coffee beans are indeed fermented—as are cacao beans—but it’s more of a way to break down the sugary, unusable outer layers of the berry versus adding flavor and ethyl alcohol in beer. There are multiple ways in which coffee is fermented—one of my favorites is being pooped out of a monkey’s butt, of course!—and you can learn about them as I did here and here and, if you have academic access and really, really like reading about real coffee from the hills of Colombia, here.

³It’s worth noting that the coffee reviewed here was purchased mid-October 2018 at the Dark Matter Osmium location on Belmont (Lakeview, 60657!). Their hop and barrel-aged coffees are clearly going to vary from batch to batch depending on hops, barrels, timing, agricultural variances, moon phases, etcetera… as they should.